After expanding operations eight times to meet customer over the past couple decades, PK USA was expanding again as its customers added new vehicles in the U.S. that had previously been assembled overseas. But to continue growth PK USA, a primary supplier of metal body, chassis, and plastic injection parts for domestic and international automotive companies, had to optimize its operations.

The parts supplier, which stores up to 1,000 stamped parts and components between its stamping and assembly processes, had been using eight different types of containers for storage in existing warehousing.  But this arrangement was not sustainable with continued production growth.

“Many of our storage containers used space inefficiently, had weight and stacking limitations, and required frequent replacement because they broke down in our environment,” says Dan Sizemore, a senior engineer at PK USA’s Shelbyville, Indiana facility.  “If we hadn’t sought new custom containers, we would have had to expand our warehouse to meet the demands of continued growth.”

According to Sizemore, for instance, a new product needing parts storage between die set ups was not stackable with wood pallets or wood containers, and required considerable storage space.  Among the variety of storage containers, the material handling capability was also less than flexible, and their tracking and inventorying needed improvement as well.

After reviewing PK USA’s current storage situation, Sizemore noted that one design of an existing wire mesh container, originally made over 20 years prior by Steel King, an industrial storage rack and pallet rack manufacturer, was still functioning well and had several decades of use left in it.

Sizemore recommended the continued use of the wire mesh container, plus adding a few new custom containers, including some with corrugated sheet metal walls, that would be fully stackable and accessible from all sides.  This consolidated storage from about eight container types to four custom container types, optimized to store and stack efficiently in existing warehouse space, while expediting material handling.

“Because we’re now able to store at least 30 percent more parts in the same warehouse space, we’ve avoided expanding our plant simply to store more parts,” says Sizemore.  “We’re able to stack six high with the new containers, versus only four high at best with our previous containers.”

For the parts storage that was unstackable using wood pallets or wood containers, a special rack with adjustable pins was developed that enables securing the part, as well as stacking the racks up to four high for space savings of at least 75%, says Sizemore.

To use the “pin rack,” an operator first slides the pins in a channel up against the stored part.  The operator then locks the pins in place at whatever configuration is needed to secure the parts in the rack.

“The pins accommodate the dimensions of the part and secure it in place,” explains Sizemore.  “Unlike racks that are welded in a solid stand for a particular part and must be discarded once the part has finished its lifecycle, the pin racks are adjustable so we’ll be able to use them for new parts far into the future.  Where the lifecycle of a typical automotive part is about four years, we expect to get flexible use of our specialized racks for 40 to 50 years, with ROI in about two years.” 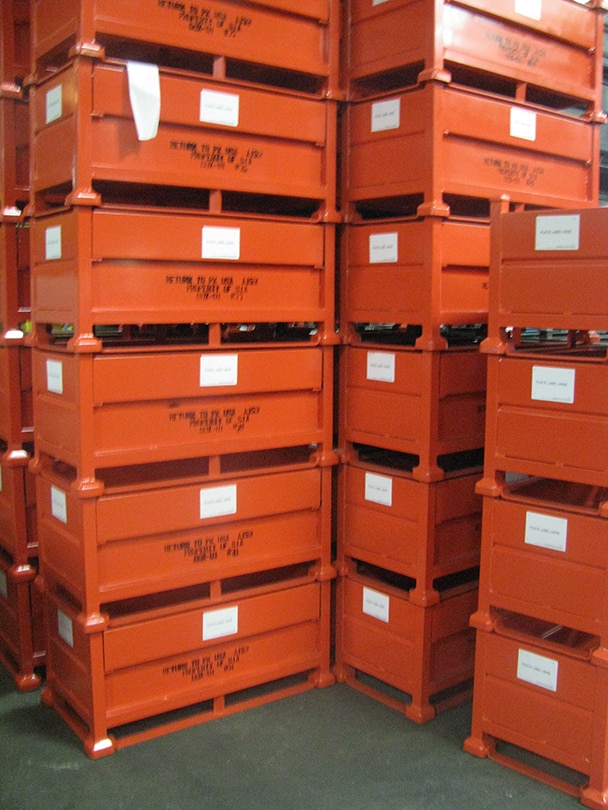 Floor runners allow steel containers to be accessed from any side with a forklift.

In another instance, floor runner bars were added to all four sides of a new custom container; this allows operators the flexibility to pick up the container from the end or the side, which improves storage efficiency and material handling.

“Since the floor runner bars on all sides of the containers allow us to stack them from the end, we’re able to stack more containers in a shorter space for about 30 to 40% space savings,” says Sizemore.  “When we’re moving containers around the plant, we’ll load them from the side because it’s easier.”

Reducing the need to track, inventory, repair or replace eight types of containers down to four durable containers and specialty racks has improved labor efficiency by at least 20%, along with the addition of a number of labor-saving features in the custom containers, according to Sizemore.

To improve material handling, one custom container was created with four half-drop 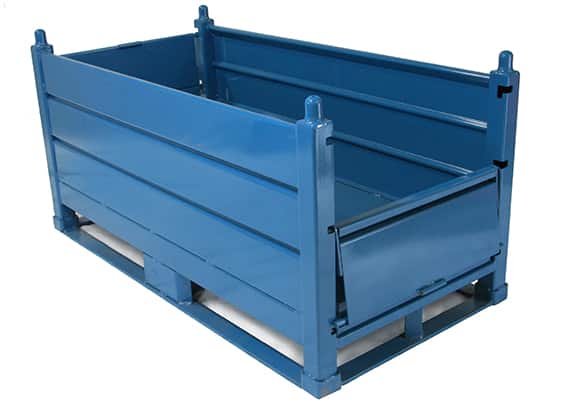 gates, according to Sizemore.  “We’ve prevented an ergonomic concern at our stamping press because we’re able to load the containers from the side, instead of the ends,” he explains.

“With drop doors on both ends, we’re also able to load parts off the stamping press in one configuration and then unload them from a different drop door in our welding shop.  This expedites material handling and eliminates the need for additional space in our welding shop when we occasionally have a line constraint that requires it.”

According to Sizemore, anyone who wants to maximize the storage density and material handling flexibility of stackable containers should look into custom storage containers like Steel King’s  “They are well-built containers whose value to operations only increases the longer they are around.”