With lean manufacturing and innovative safety barrier use, Katecho boosts production by 130%, improves quality, and cuts labor in half

Katecho, a Des Moines, IA-based contract manufacturer and OEM of medical and cosmetic devices, knew it was time to reinvent its production process. While business was brisk for its products ranging from heart defibrillator electrodes and wound dressings to hydrogels, lean manufacturing and an innovative use of guard rail was necessary to take production to the next level. 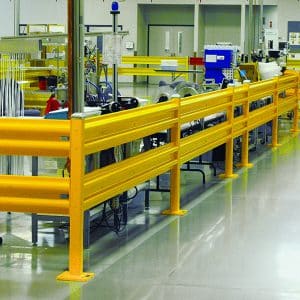 Uncluttering the production floor of a “forest of power and utility poles” was also a goal, says Anderson.

To streamline assembly, the company decided to implement a lean manufacturing, work cell-based process on the production floor. This would separate workspace by product in one compact line using multiple small machines instead of a large, job-specific machine. It would not only help to prevent cross-product mixing and worker wandering in efficient automated work cells, but also complete the assembly process from raw materials to finished product.

Initially, the company considered both heavy-duty guard rail and light-duty hand rail as a workplace safety barrier to separate its lean manufacturing work cells from each other and from light traffic in the area.

On the recommendation of Riekes Material Handling, a Waukee, IA-based material handling equipment distributor, the company turned to a medium-duty guard rail that costs significantly less than the heavy-duty type often used to protect equipment or pallet rack.

“Steel King’s Armor Guard Industrial Safety Railing, made of corrugated 11 gauge high strength steel, is a much stronger and more visual barrier than hand rail at about the same cost,” says Mike Bruckshaw, the Riekes Material Handling sales representative who helped implement the guard rail. “Since it’s modular and comes in one to 10-foot lengths in one-foot
increments, it’s easily customized, expanded, or relocated as production demands.”

The workplace safety barrier’s universal posts have connection holes on three sides instead of the industry typical one or two, which helped to speed its installation and customization at Katecho as well.

“The medium-duty rail components were interchangeable, adjustable, and came in enough lengths that we created the exact configuration we needed,” says Anderson. “We were able to squeeze a 50’ x 90’ production machine area into a 50’ x 18’ area for the smaller machines, and change the layout to match that. It fits our equipment and work cells so efficiently that we’re maximizing our labor and production space.”

Worker productivity and quality control is much improved. On each lean manufacturing production line, for instance, a single lead person and quality inspector can allow the line to run without issues, says Anderson.

The new production lay out has also cleaned up visual clutter to good effect. In place of the previous “forest of power and utility poles”, the medium-duty  industrial safety railing supports hook up lines for data, air, vacuum, and electricity.

“Since changing production to the lean manufacturing work cells, we’ve added several large customers and the guard rail is an important part of that process,” concludes Anderson. “It has not only helped to optimize our operation but also the aesthetics. When customers visit, our clean, controlled process builds confidence and contributes to future sales.”

Any cookies that may not be particularly necessary for the website to function and is used specifically to collect user personal data via analytics, ads, other embedded contents are termed as non-necessary cookies. It is mandatory to procure user consent prior to running these cookies on your website.